Reminder: our Discord community is up and running!
Just a reminder that we have a fairly active Discord community for MobyGames with a number of contributors stopping in and chatting. If you're a regular contributor - or are just thinking about starting - then we recommend you come and check it out!
Submitted by Simon Carless (1851) on Aug 26, 20179 comments
New iPhone MobyGoal; new MobyPoints rewards for descriptions!
Two small updates: firstly, we've updated the MobyGoal to be 4,500 iPhone games, because we made it to 4,000 so easily! (Sorry to those who helped us get there - it's just a bit further to this new goal :P)

Secondly, after some notes on the rewards for ad blurbs vs. descriptions, all handwritten descriptions are now worth 4 MobyPoints on the website (so 3 more points than previously). Hope this'll help encourage.. there may also be an additional modifier for complexity in the future.
Submitted by Simon Carless (1851) on Aug 20, 201712 comments
2017 - a fine year for adding games on MobyGames so far! 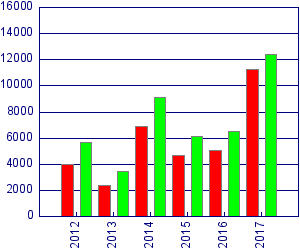 We just wanted to highlight the above graph, for which the red bar is the number of games - of any era - added on MobyGames by users since 2012. So 2017's total additions include games from 1981, 2012, and even 2017! (Side note: the green bar is number of times games have been set to 'pending', so includes 2 entries for anything that needed to be set to WIP.)

Current MobyGames management took over the site at the end of 2013, following an aborted site redesign. We're proud of the work you've done with us to keep up with what is an increasingly crowded game market, and fill in a lot of older holes in our database! (And there's four and a half months to go, so expect 2017's red bar to go a lot higher by year's end.)
Submitted by Simon Carless (1851) on Aug 14, 201726 comments
Graph: Gameplay Genres
I'll try to make this a sort of semi-regular thing. Previously I posted about Main Genres.

This time, using the MobyGames API I generated the following graph depicting the release of games of specific gameplay genres per year.

The vertical axis is number of games. Each game in the database is represented in the graph for the first release it was available.
Submitted by vedder (57223) on Aug 05, 20172 comments
New MobyGoal - adding iPhone games, before they disappear!
As you might have seen discussed in recent articles, there's about to be a whirlwind of iOS games rendered unplayable - and perhaps eventually removed from the App Store, due to the changes in iOS 11 & dropping of support for 32-bit apps.

So we decided to make our current MobyGoal around adding iPhone games, with an initial total of 4,000 targeted. (We're already 50% of the way between the previous total and the goal, partly because Sciere has been adding lots on his summer holidays, which is great - but we need your help.)
Submitted by Simon Carless (1851) on Aug 04, 20173 comments